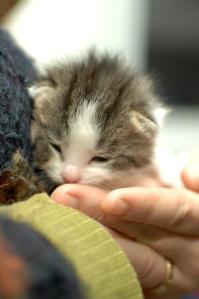 People in the publishing industry work hard to get book covers right. They consider content, style, tone, theme. Twenty theories about what works exist; if you want to see them all, read the Guardian article that detailed them by googling “Scent of a Kitten.”

For it is theory #20 to which we turn our attention today: “Nothing draws a reader to a book like a picture of a fluffy kitten.”

Indeed. Nothing draws customers, either.

Meet Clyde Edgerton (that’s him with his nose in the air on the left) Amy Clark (below) and Silas House (getting a cuddle above). We were going to name the girl Anne River Siddons, but a friend is drafting an Appalachian memoir, and what the hey, the kitten looks like her.

We started naming our foster kittens after books because it was cute and funny–and then we found out that people adopted the li’l darlins faster with literary names. Something to do with them being born in a bookstore–the kittens, not the customers.

And that kitten cover theory thing works; these tiny fluffballs cast the glamor over everyone who sees them, including Jack and me. After a hard day of shelving and basement renovation and customer service, we sit upstairs for fifteen minutes while the fur babies climb all over our legs and stare into our faces and make little “mip” sounds that we think will be mews when they’re older.

We were away the weekend the kittens turned two (weeks) which is when they began to leave their soft cave of blankets draped over furniture to explore. Kittens handled for the first time will  exhibit stress and fear, so we told our local shopsitter Wes, and Heather our cleaning lady who lives up the street, not to worry, just please feed mommy Tallulah and we’d take care of socializing the kittens when we got home.

Worry, ha! When we went upstairs to greet them on our return, the kids leaped from their cushioned basket (basket? we didn’t leave a basket and we certainly didn’t weave a satin ribbon ’round one) to clamber into our palms. “Start the elevator!” they all but shouted. “Finger ride; finger ride!”

Jack looked at me over the rim of his glasses as Clyde, the adventurer, attempted to climb into his ear. “I guess we know what went on here over the weekend,” he said. Turns out, between Heather and Wes, a steady stream of guests visited the cathouse. Tsk tsk. We’ll be shut down!

But we understand. Nothing soothes the soul quite like three cherubic kittens romping and frolicing. Lowers the blood pressure.

Clyde, Silas, Amy and their mama will be ready to go to their forever homes in about four weeks….. 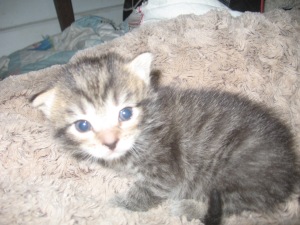 We foster a lot of cats here at Tales of the Lonesome Pine, and this month we took in a teen mom and her three infants. The babies (Clyde Edgerton, Anne River Siddons, and Silas House) are thriving, and Tallulah (the mom) is putting on weight and getting a healthy shine back into her beautiful dark fur. She has russet undertones to her smoky brownness, and a very warm personality. As Jack said, “Easy to see why the boys went for her, eh?” 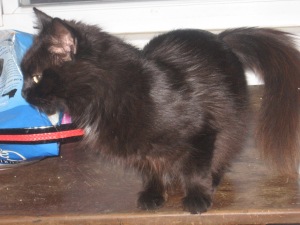 Tallulah’s a good mother, but even the Supermoms want some off-duty time. So the other day, when I opened the nursery door, she made a break for it–and ran straight into Owen Meany’s chest.

Owen Meany is our cheerful adolescent kitten. We’re not sure if he’s an eejit, or an evil genius; it’s amazing how he’s carved his place into the bookshop staff hierarchy in just six short months. For instance, he’s made friends with ValKyttie (something almost no one can do) and she lets him finish her morning snack right off her plate. Nobody else tries that, believe me.

Owen is also a big boy; think defensive lineman. So when Tallulah fell into his arms, he wasn’t even winded–but he was bowled over.

Nose to nose the pair gasped, Tallulah against Owen’s massive chest in a classic B-movie scene, gazing up at him from beneath long black lashes as he stared down in besotted amazement. Then Tallulah backed coyly into her nursery, while Owen, blinking, gazed at the closing door.

He looked up at me, golden eyes round and glassy. “Who? Was? That?”

Well, it was inevitable. What did I think was going to happen when the linebacker met the homecoming queen? He’s in love. Or something very like it.

Owen now spends a lot of time passing by the nursery door in an overly casual way–“just out for a stroll, oh look, how did I happen to get here?”–listening in case his beloved wants anything. Last night I caught him sitting atop the phone directory, open to florists. We’re expecting a catnip bouquet delivery any moment.

I’ve tried to explain to him that she’s not staying, there’s no point in getting his heart broken, that she’s got kids and those relationships can be complicated for a boy just starting to date…. 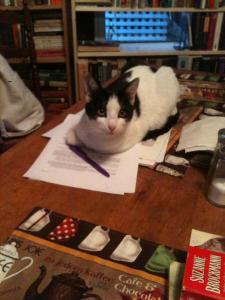 But he’s writing her poetry. We found him with this pen, looking pensive. I’m sure it will end in tears. There’s that little matter of Owen’s having been neutered.

Still, the course of true love never did run smooth.