Davy first came into my life in the mid 1970s when he was in his early 50s and I was in my 30s. I was at a party in his house when I discovered that he had been a fiddle player as a youngster, but hadn’t kept it up. But he got out his violin and we found we could play a few tunes together.

The very first time I persuaded him to get up and play at the local folk club not long after that first party, he prepared to play the first note and promptly fainted. Half an hour later he got back up played like nothing had happened. A few years later he joined a group of us to create ‘Heritage’.

His favourite place, after Fife, was France. He famously spent 6 months there after Heritage broke up and wound up as guest fiddle player with the Occitan group ‘Los Cotillons de Tonniens’ touring all over the country with them (in costume) playing all the tunes he’d fallen in love with when Heritage had toured there many times.

Heritage spent 15 years playing traditional Celtic music at folk clubs, festivals, concert tours, radio and TV all over Scotland and Europe; Davy was an integral part of the front line for much of that time. By profession he was an internationally recognised artist with work hanging in prestigious collections all over the world, as well as a much loved art teacher in a Fife High School who certainly influenced his pupils very much for the better. But he often said that his musical career saved his sanity from the bureaucracy and politics of the Scottish education system. 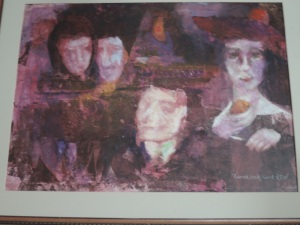 During our travels with Heritage the stories about him abounded – from his terrible driving to his ability to fall asleep at the dinner table. He would be the first to admit that he wasn’t a great fiddle player – and yet – he helped establish the sound of the group and that didn’t change much despite various personnel shuffles over the years. The other great stories were the ones that he told – like the time he joined the Home Guard so he could have a rifle to shoot the capitalists when the war was over, and on, and on – –

Davy died peacefully in his sleep on December 28th 2014 at the age of 92 after some health issues over the last year or so.

I consider myself lucky to have known him and to have had him as a friend.