Listen up, people. I am Sansa Stark, and my family and I have been treated most vilely. We came to this foster home believing they would be good to us, and at first I admit they were. Wet food, soft beds, a climbing tree, and we got lots of cuddles and shoulder rides.

Yes, thank you, but that doesn’t make up for what came next. One morning bright and early with no warning, that sweet-voiced lady who’s always cooing and carrying us around picked us up and deposited us without ceremony into a box. And closed us in there, and carried us off, despite our protests.

Next thing we know, we’re in this big bright space and dogs are barking and people are petting us and saying things like, “Bath time, babies!”

Bath? What is this thing you speak of? We like petting, and their hands were nice so we didn’t think anything about it until…..

WATER! WATER EVERYWHERE! I watched in horror as someone picked up my baby brother Rickon and set him under a little waterfall. He yelled for help, but there was nothing we could do except watch as they cruelly applied a foul blue gel that foamed and bubbled like a witch’s spell, and then thrust him back under the waterfall, again and again.

Truth be told, I had thought Rickon was black and brown. I didn’t expect him to be so white.

Anyway, no sooner had his cries subsided when they reached for me….

I will be avenged. Do you hear me? I will wreak such havoc as has never been known in this kingdom or the next…..

We would like to be adopted now, please. Obviously this is not a place we can trust. I will reward handsomely the first person to rescue any of us. Me first, of course. 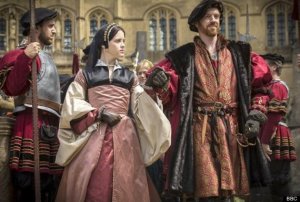 This book caused quite a stir when it came out, and has recently been made into a Masterpiece Theater mini-series, so probably most of you have already heard of it. I’m a sucker for historic fiction, but too often that means a thinly veiled bodice ripper in the hands of lesser artists.

Not here. This is a tough, sardonic, wickedly funny underneath and terrifyingly brutal on the top portrayal of one of the most confusing and dangerous times in political history. You weren’t going to get killed in the breakdown of government, but BY the crazy, inhumane government itself.

Hmm, maybe that’s why we in the early 2000s are so fascinated by King Henry’s court, when two almost equally powerful factions were smashing into each other trying to reign, with the end result that no one knew at any time what was right and wrong to be doing in the eyes of the law, or whether they were going to go to work tomorrow.

This book uses sarcastic wit, historic accuracy, and the filling in of a few personalities, to present a novel without heroes, from a time period that might have been the same. Everyone believed in something, but nobody believed in the same thing–unless the king wanted them to, in which case they either did believe it, or died in some horrible way. Ho hum…. The genius of the writing is how well Mantel makes then feel like now: the animals are going extinct; modern times are too fast to keep up with, now the printing press has been invented; the rulers are fickle; the parliament can’t get anything done. Etc.

Mantel’s good at description, and I’m not such a fan of dense descriptive books when it comes to room settings or wooded copses, but she does make you feel as though you are there. And when she gets to describing the tensions in the room at any given meeting, suddenly less is more. She conveys so much through dialogue, you wonder how she manages to write up settings so descriptively well. Usually a writer is better at one than the other, but she’s great at both.