Don’t forget the Author Humiliation contest ends Sunday, June 29. Send entries to jbeck69087@aol.com. Scroll back to Monday’s blog for the rules, and have fun!

I have arrived in Scotland, with many thanks to Kelly and Rachel Saderholm, the mother-daughter team minding our bookshop while Jack and I are making holiday.

First thing Jack and I did was make a bee-line for Jean and Davy’s place. Jean and Davy served as second parents to me during the seven years (and a day) we lived in Scotland, and I was so delighted to see her again.

Jean is the woman who advised me, “Be yourself in Scotland. People here will be seeing ‘an American.’ Just be Wendy, and let them figure it out.”

Time has taken its payments; Jean is moving with difficulty and the aid of wheeled things. Her husband Davy has left behind this mortal coil in all but body; an artist whose paintings were exhibited internationally, Davy’s mind is now living in some of the abstract worlds he brought to canvas.

Skipping the part where one pontificates or waxes philosphical on the ravages of time, or the lasting bonds of friendship – it was just ever so lovely to see Jean again. I look forward to the rest of our holiday, but when your best day is the first, because it mattered most, well, icing on the cake is very sweet. 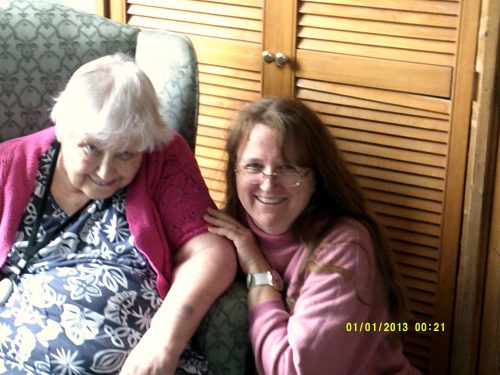 One response to “So Happy Together”