Ask Me ANYTHING about Law & Order…. 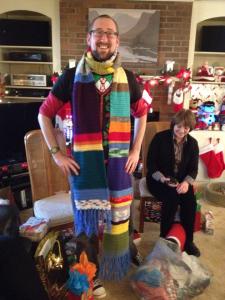 Wes is our first-call shopsitter. He watches the store at least once a week, so that Jack can pre-record his radio programs in Johnson City (Celtic Clanjamphry, available Sundays at 9 pm on wets.org if you’re not within listening distance) or work on home improvements, perhaps even a weekend getaway for us here and there.

Wes and his lovely wife Rachael were the first couple to get married at our bookstore. Valkyttie attended the ceremony, and blessed the union by napping on their marriage certificate during the vow exchange.

They’ve been with the firm practically since the beginning. Wes bottle-fed several of our sick foster kittens, while Alexander, their 22-pound gentle giant, was one of the bookstore’s earliest fur babies.

As Wes won’t take a dime for minding the shop, we have a standing arrangement regarding birthday and Christmas presents. They take what they want from the shelves (including new books, consignment crafts, whatever) and we hand it over with gratitude.

This Christmas sorta snuck up on us all, so it was Dec. 1 before Wes and Rachael came to dinner with a list that ran heavily to handcrafted items. In short order I found myself promising to crochet four spay-and-neuter afghans, three Dr. Who scarves, an American flag quilt, a wreath and a potted houseplant. 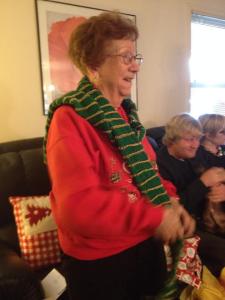 I offered to do five gold rings as well, but no, they were cool. And yes, you can crochet potted houseplants. Check Pinterest.

By Dec. 12, I had congratulated myself on knocking out the afghans while binge-watching Seasons 1-3 of Law and Order on Netflix. On Dec. 16 I was swinging onto the last of the scarves and knew with certainty that assistant DA Claire Kincaid wore only five blouses the whole of seasons 4 and 5. The new Lieutenant had but two work jackets.

A message came from Rachael; nix the crocheted houseplant and do an “elegant” scarf in Christmas colors. That gave me a leap forward. Dec. 20, the night before Jack and I were leaving on our week-long hideaway vacation, I was seven rows from finishing the last flag and really sick of Jack McCoy’s know-it-all attitude.

My own Jack made a heroic trip to Walmart (a place we normally avoid, but desperate times call for desperate measures) at 5 pm on the last shopping Saturday before Christmas, returning ashen-faced with white felt from which he cut a circle of 13 stars–after a steadying whiskey, of course. That took some pressure off. Sunday morning I whipped out the final rows on the final project and slapped a heating pad onto my right shoulder. If anyone at the Christmas service noticed my hunchback ensemble, they didn’t comment.

Because we’d do anything for Wes and Rachael,  who have done so many things for us. Valkyttie doesn’t approve of just anyone, after all.

You know the saying, “Use your friends wisely?” I have this friend, Chelsie…

Jack and I were proud of building a Facebook page for our bookshop. We felt social media-accomplished, slick even, when we added news about my forthcoming book on independent bookstores. But when St. Martin’s Press started saying things like “you need a Twitter presence” and “what about hits from YouTube,” a sinking feeling formed in our guts.

I’d never tweeted anyone in my life; I was raised in a respectable, Southern family.

Enter Chelsie. Twentyish with a Master’s Degree in something to do with computers, she has luminous dark eyes as big as the Earth, and a dancer’s body. Men breathe hard when Chelsie wafts into a room. Plus she’s really, really smart.

Chelsie likes fashion, and cats, and anything to do with computers.

Chelsie offered to help – or maybe I coerced her; it’s all a bit hazy – and soon I was tweeting away, presided over a newly revamped blog, and had an Author page on Facebook connected to Goodreads, Pinterest, Youtube, Flickr and a bunch of other stuff I’d never heard of. When I inherited an iPad, she married it to my laptop with a few flicks of her long red fingernails across the keyboard.

The coolest thing about Chelsie is that she gives instruction tailored to my needs: “OK, here’s the ‘on’ switch,” is her standard opening line.

In appreciation, we try to return favors. See, Jack and I are totally the people you want to know when the apocalypse hits; we can make shoes and furniture, plus Jack is a wonderful singer, so we’re good face-to-face company.

But in a world hurtling through techspace at the speed of human thumbs on a keypad,  our skills are old-fashioned. Our tech queen is a thoroughly modern Chelsie, capable of bringing down a developing nation’s government with her blackberry if she chose. I am VERY glad Chelsie is on our side instead of Amazon’s; she could get anything she wanted online in five seconds or less, but supports local shopping–and independent bookstores in particular.

So Jack made her Indian curry, we sent tomatoes from the garden, and finally, inspired by hot pink yarn found in my stash (how did THAT get in there?!) I made her one of those all-the-rage curly scarves.

Jack photographed it modeled by Val-kyttie, bookshop manager. Chelsie tweeted a pic of herself in the scarf, but I don’t know how to get it off Instagram. (One step at a time….) 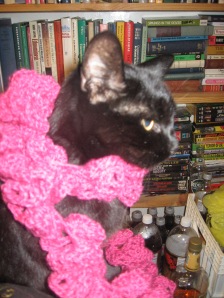 (This was made from eyeballing one a friend brought to the shop’s Needlework Night. Chain 150 LOOSELY with an I hook using standard weight yarn; turn, chain 4, dc in fourth ch from hook, [dc, ch 1] 4 times in same ch, then [dc, ch 1] 5 times in each chain across; turn, chain 4, [dc, ch 1] in each dc across; do not turn, sc in each stitch around for a nice finished edge.)